Zumbathon benefit will be held Saturday

Lindley Mayer witnessed the struggles and found inspiration in her younger siblings, Brock and Brant- ley, who were both born with Renal Fanconi Syn- drome, which affects the kidneys. They have intel- lectual and physical dis- abilities, and neither Brock nor Brantley can read or write, and Brock is unable to speak.

“When I was really young, I would hear people using hurtful words towards my siblings or mocking the way that they speak or communicate,” Mayer said. “At first, I didn’t know what to do and I just felt really embarrassed. And finally, one day, I stood up to the kids who were doing that and I just realized that I have a voice and I’ve been blessed with the ability to be able to speak out for these kids. I think as I got older I just realized how important that actually is and that’s why I started Lindley’s Al- liance for Disabled Youth, and that was founded in 2005.”

‘I stood up to the kids who were [mocking my siblings]

and I just realized that I have a voice and I’ve been blessed with the ability to be able to speak out for these kids.’

Mayer was 18 when she founded L.A.D.Y. Bug, and, through the organization, she promotes language awareness and fundraises for her cause. Through her non-profit organiza- tion, Mayer said she raises $8,000 – $10,000 a year for the Greenville Children’s Hospital and Children’s Miracle Network, rais- ing about $46,000 for the cause since it’s inception. However, Mayer isn’t done yet.

She is hosting a Zum- bathon on Saturday, May 10, from 11 a.m. – 4 p.m at Pelham Road Baptist Church, 1108 Pelham Road, Greenville. Two Zumba classes will be held at noon and 2:30 p.m. and several food, retail and non-profit vendors will setup for the public peruse. The event costs $15 in advance or $20 at the door, and tickets can be purchased at change- words.org.

“I have two special needs siblings and, at a very young age, I knew that I wanted to raise aware- ness, funds and hope to benefit not just my sib- lings, but all children that are living with disabilities or rare conditions like the children at the Children’s Hospital of Greenville, so I became really involved with the Children’s Miracle Network,” she said.

“A lot of people think that the fund that they do- nate to Children’s Miracle Network is for operation costs and that kind of thing, but what the funds do that the donators give 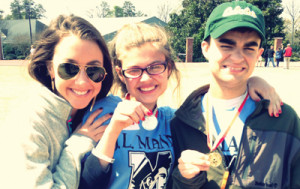 Lindley Mayer, left to right, and her younger siblings Brantley and Brock, share a unique bond.