I recently had the wonderful opportunity to be featured in the August 2014 edition of the Greenville Fete Magazine! You can read the original article on their website, or right here below:

“It’s been done before; the sweet tea to stardom story, and the subsequent humble return to one’s roots. But what if it featured none of the attendant drama… and most of the feel good up front?

Lindley Mayer might be best recognized nationally for her role in the blockbuster “Hunger Games” series. But it’s her action on film sets across the Upstate that has helped the 24-year old actress make a name in the community.

Having cut her teeth on the film sets in the Carolinas, Mayer got her first taste of the spotlight at age siz, starring in “Bastard Out Of Carolina,” which was shot outside of burgeoning film hub, Wilmington, N.C. Subsequent years found her honing her acting chops, as well as growing her dance skills throughout high school. After winning the Miss Teen South Carolina pageant in 2005, Mayer moved to Los Angeles to pursue show business full-time.

In California, Mayer made a living by dancing, acting and performing on film and television sets for six years. Despite starring roles on television series such as “Glee” and more, Mayer ironically kept landing gigs close to home, including the right one at the right time.

In summer 2013, Mayer returned home and began work on “Morningside,” a TV pilot produced by industry veteran Brian Kelley, and currently being filmed in Greenville, Seneca and other locations across the state. Her storyline mirrors that of the would-be show… but only slightly. Whereas the proposed drama centers on the lies and lives of two prestigious families who have returned to the South, Mayer’s own narrative forebodes a lot less sinister.

A large portion of her time is spent conducting fundraisers and events for her non-profit organization, L.A.D.Y Bugs Across America; or Lindley’s Alliance for the Disabled Youth. Inspired by the struggles of her younger siblings, the charity works with families to donate money to the Children’s Miracle Network at Greenville Health System. In keeping wither her philanthropic vision, Mayer also stays active within the pageant community, and also teaches acting, dance and talent classes for children and performers of all ages.

Though she travels periodically to California for work, her focus is currently shifted toward the Upstate film scene, including networking and coalescing of the local community, as well as taking on roles as a spokesperson for a variety of events, causes and brands.

Keeping a close team of friends and advisors around her, Mayer continues to chase her dream, performing and providing for her community and proving that with charm, class and grace, it’s a lot easier to skirt cliché.” 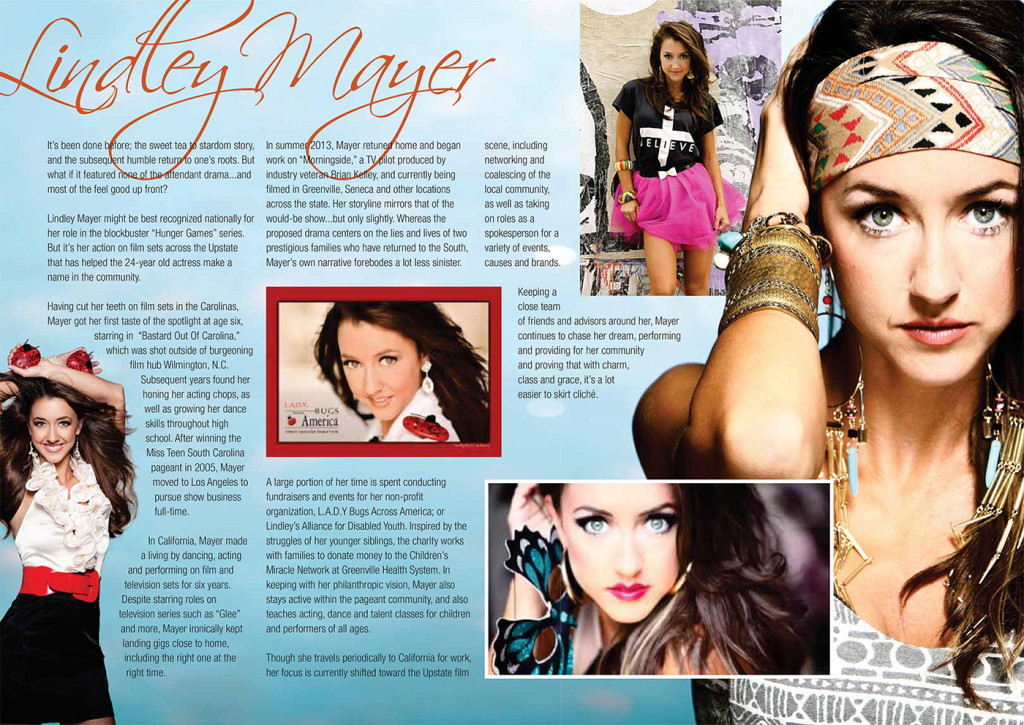